Images of the General Strike 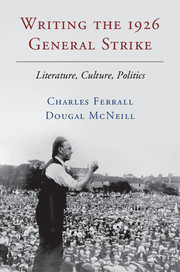 The interconnection between politics and literature is a fascinating subject. If politics is about more than exit polls and focus groups, if it concerns a total transformation of the human condition, then literary representations can enhance our understanding. And if politics can inspire commitment, sacrifice and celebration, then it is surely a worthy subject of literature. Yet all too often works that aspire to link the two fall short of their aim. As Ferrall and McNeill note, the division of labour imposed by academic “disciplines” all too often produces inadequate works: “the bulk of criticism under-reads the complexity of political thought, and … most ‘political’ readings of literature under-read its literary quality.” And since it is often easier to stay within the cosy confines of a discipline, some subjects are avoided altogether. Thus, the authors claim, “no book on the General Strike and literature has ever been written”.

McNeill and Ferrall have risen above the academic demarcation lines. They seem equally at home with pentameters and picket lines, with synecdoche and syndicalism. In a short but dense and thoroughly documented account they cover a wide range of material, from books entirely devoted to the Strike to others where it appears only as an episode or is an indirect influence. They cover both well-known canonical authors and lesser-known figures, long forgotten conservative playwrights and equally neglected worker writers. Their eight chapters move across a broad spectrum from right to left; the first part, entitled “Writing from the Outside In” covers writers not directly involved in the Strike, but affected by it, while the second part, “Writing from the Inside Out” looks at those more directly involved.

They begin with a number of conservative accounts of the strike, from Noel Coward’s deflation of socialist politics to Evelyn Waugh’s “anarchic form of reactionary conservatism”. They note HG Wells’s élitism, leading him to envisage the idea of “Fascists of the Light”, while Arnold Bennett saw the Strike as “a political crime that must be paid for …. a pathetic attempt of the underdogs who hadn’t a chance when the overdogs really set themselves to win”. After these various right-wing failures to understand what the Strike was all about, there are two very interesting chapters showing the impact of the Strike on well-known novelists.

Virginia Woolf was actually in the middle of writing To the Lighthouse during the Strike. She had no overt sympathy for the action, calling it “this horror”. But by a careful examination of her various revisions to the text, the authors argue that the impact of the Strike can be found in the novel, not explicitly, but in the evolution towards a more sympathetic treatment of Charles Tansley, the one character who is both lower class and a political activist. The next chapter deals with DH Lawrence’s Lady Chatterley’s Lover, of which we have three different drafts. The authors argue for the impact of the Strike on Lawrence’s outlook, and claim that while “the direct political references …. largely disappear …. in a broader or more general sense its politics are intensified”. This despite the fact that Lawrence’s first draft made the gamekeeper a Communist Party branch secretary.

I remain not wholly convinced. There are rather slimmer pickings in a chapter on the “Auden gang”, whose politics come across as fairly superficial. Most of Auden’s mates at Oxford went off to be strike-breakers. Auden, out of “sheer contrariness”, volunteered to drive a car for the TUC. When he mentioned this on a visit to his cousin, he was thrown out of the house. Auden noted sourly: “It had never occurred to me that anybody took the General Strike seriously.”

For the writers in the second section the strike was indeed serious. They were activists, working-class or closely linked to the labour movement. First there is a chapter comparing two well-known Scottish writers, Hugh MacDiarmid, author of the poem A Drunk Man Looks at the Thistle, and Lewis Grassic Gibbon, author of the novel trilogy A Scots Quair. It is difficult for a non-Scot to evaluate the poetic virtues of the “synthetic Scots” language in which MacDiarmid wrote. He was an activist, first in the Independent Labour Party and later in the Communist Party. But Ferrall and McNeill have unearthed some damning evidence of his political élitism. He considered that most ordinary people were “precious poor specimens …. and utterly destitute of any integrity or worthy purpose in life.” His “Leninism” gave a bizarre interpretation of the Bolshevik party: “Lenin “knew that the mass of people were of no use for his purposes – he was going to effect a revolution so he had to get storm-troopers.” So they unambiguously side with Grassic Gibbon against MacDiarmid: “MacDiarmid offers an explanation for the Strike’s failure; Gibbon incorporates the strike into his story in order to allow competing accounts and explanations to play out in the narrative discourse.” They conclude, damningly: “MacDiarmid was a Communist who was never a Marxist. Gibbon was a Marxist who was never a Communist.”

The next chapter deals with a number of English novels; one of them, Clash, by Ellen Wilkinson, later a minister in the Attlee government, used the form of romantic fiction. Joan Craig, an activist during the Strike, has to choose between two lovers – Tony, a middle-class representative of Bloomsbury, who wants her to abandon her union activity, and the less thrilling Gerry, who wants to share in her activism.

The final section is devoted to Welsh novels about the strike. Particular importance is given to the role of women in the mining villages. The authors also note that many of the villages were closed communities. Often there were no scabs, and no representatives of the enemy class.

There is much more fascinating information in this book, and it deserves to be widely read. The price is probably out of the reach of most of those reading this review, but if possible it should be ordered for libraries, in the hope that there will be a paperback edition. If I have one reservation, it is that while in most of the book the exposition is clear and accessible, from time to time the authors lapse into an academic jargon which could easily be an obstacle to readers whom the book ought to attract.

I am left with a final question, which the authors might address in some future work. A strike – and especially a general strike – points to one of the most fundamental features of the human condition: human civilisation is founded on human labour, and if that labour is withdrawn, then the civilisation itself is called into question. Yet how many widely read novels take the rhythms and complex interactions of a strike as their main subject? Zola’s Germinal, Ousmane Sembène’s God’s Bits of Wood – and how many more? All too often, even in this excellent study, the Strike is merely tangential to the literary work. Let us hope that in the future more writers will address this question - and that the labour movement will provide them with more raw material.